Tashi Chöthang Monastery was the seat of Khentrul Rinpoche’s root teacher Kyabje Lama Lobsang Trinley. It is a branch monastery of the famed Dzamthang Tsangwa Monastery.

Nestled a valley within the Zidka region, Tashi Chöthang Monastery was founded by Ngawang Tenpa Seljé, the disciple of the Tsangchen Tulku. The monastery was built on the site where Lama Tsangwa is said to have practicend and given many teachings.

The second resident teacher of this monastery was the famed Lhazo Lama (also known as Ngawang Chözin), a highly realised yogi of the Kalachakra generation and completion stage practices.

Since that time, Tashi Chöthang has been home to a long line of highly realised and respected lamas, such as Lama Nyamnye, the great scholar Ngawang Tsognyi Gyatso, Ngawang Sonam Sangpo, the highly realised Lama Tenzin Pal, Lodrö Tsultrim Sang and Lama Rinpal, the great saviour of beings.

The ninth resident lama was the great Dharma King and highly realised master Kyabje Lama Lobsang Trinley. After the Chinese invasion, he worked tirelessly to rebuild the Mahayana and Vajrayana Buddhism of Tibet, teaching extensively and training many great scholars and practitioners in the Jonang and other traditions. Lobsang Trinley’s students helped him establish shedras (monastic colleges) in a number of monasteries, thus helping to preserve the authenticity of the Buddhadharma. He also taught the Six Vajra Yogas of Kalachakra extensively, thus upholding this ancient lineage of practice. 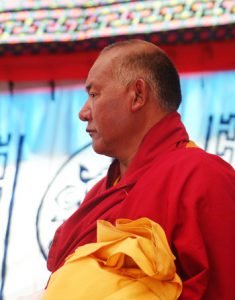 Lama Ngangtong
Born in the remote community of Zidrup, Lama Ngangtong is known to be a very pure monk, who has always had great capacity for achieving realisations through tantric methods (tsakar). While he may not be well known as an academic scholar, he is definitely respected as a highly realised master.

Lama Ngangtong studied Kalachakra under the direct guidance of Lama Ngawang Rinpal and later with Lama Lobsang Trinley. It was Lobsang Trinley that chose Lama Ngantong to be the Vajra Master for teaching practitioners in Tashi Chöthang.

He is also known throughout the region to be a very accomplished guide at the time of death for the practice of phowa (transference of consciousness). Families from far and wide, seek him out to perform the rituals to help their loved ones attain a positive rebirth. 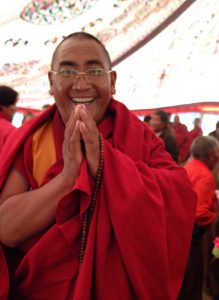 Khenpo Ngangwapal
Khenpo Ngangwapal is the resident scholar and teacher at the monastery. He became a monk when he was still a teenager and since then has had several teachers, including Lama Ngawang Rinpal. He later studied for many years with Lama Lobsang Trinley who chose him to be the Khenpo (academic teacher) of the monastery. He is known particularly for his soft and gentle attitude, earning him great respect as someone who is a kind and stable person. He is particularly well versed in the teachings of Bamda Gelek Gyatso.