While few outside academic circles have ever heard of the Jonang, it is not a new tradition. The Jonang trace their lineage back to India and the great Nalanda University. However, it did not become known by the name Jonang until its founder Kunpang Thukje Tsondru, settled in the Jomonang valley of Tibet during the 13th century.

One of the reasons that so few people are currently aware of the Jonang is due to the fact that they did not flee Tibet in 1959. So when the Tibetan Administration in Exile began registering traditions, the Jonang were absent. Therefore, very few foreigners were ever introduced to their authentic teachings.

It was not until 1990 that the first Jonang monks began to emerge from Tibet. Since then they have been requesting the Tibetan Administration to recognise their tradition as worthy of equal respect as the Nyingma, Kagyu, Sakya, Gelug and Bön traditions. While great advances have been made in respect to this, unfortunately this work is still not complete.

There are two reasons why the Jonang Tradition is so vitally important in the world today:

It is because the Jonang are the core holders of these two important lineages that it is crucial that the Jonang Dharma flourish. Failure to do so will result in the loss of these irreplaceable spiritual systems.

The Sutra Lineage of Zhentong Madhyamaka

The definitive Zhentong view was first taught by Buddha Shakyamuni in the second and third turnings of the Wheel of Dharma, being transmitted only to devotees whose minds were considered ripe for these profound teachings. On the basis of these teachings, the Bodhisattva Maitreya, the regent of Buddha Shakyamuni, taught five great treatises:

These texts were transmitted to Asanga, a monk who beheld a vision of Maitreya after meditating in a cave for 12 years. The lineage was later carried by great Indian masters such as Vasubandhu, Saraha and Gangamaitri and others. It came to Tibet in the 11th century through the translator Zi Lotsawa Gawé Dorje and Tsen Khawoche Drimé Sherab, and was transmitted in an unbroken line to the omniscient Dolpopa Sherab Gyaltsen in the 14th century.

It is said that the Buddha first taught these secret tantra teachings in Drepung in South India (Amaravati). The main recipient of these teachings was King Suchandra of Shambhala. King Suchandra put the Tantra into writing and composed commentaries. The lineage was upheld by 7 Dharma Kings and 11 Kalki Kings before arriving in the land of India.

Before the 10th century, the Kalachakra teachings were not practised in India. However, the great Indian Mahasiddha Manjuvajra is said to have attained miraculous powers and traveled to Shambhala. Upon returning he transmitted the lineage to his disciple Shribhadra.

Shribhadra’s student, the great Pandita Dawa Gonpo, spent most of his life in Tibet working with Dro Lotsawa to translate the entire Kalachakra teachings. The lineage was then preserved through many Tibetan masters such as Lama Lhaje Gompa, Lama Droton Namsek and the great Yumo Mikyo Dorje, who shared the teachings widely.

In the 13th century, Kunpang Thukje Tsondru received over 17 different Kalachakra lineages from many different masters and spent many years in retreat practising the Six Vajra Yogas in a place known as Jomonang. This later became the site of the main Jonang monastery, also known as the Second Shambhala. Thukje Tsondru then combined these lineages into a single extraordinary practice lineage which has been the core of the Jonang curriculum to this day.

Dolpopa Sherab Gyaltsen, was an incredibly influential master. Among his many achievements, he was responsible for developing a unified system of practice which combined the Zhentong Sutric View with the Kalachakra Tantric Practices. Through this system, practitioners would develop their view by meditating on the meaning of Maitreya’s “Five Treatises”. Then they would apply their direct realisations to the practice of Kalachakra. Later, Kunga Drolchok and Taranatha expanded on this system by further clarifying many of Dolpopa’s extraordinary teachings. 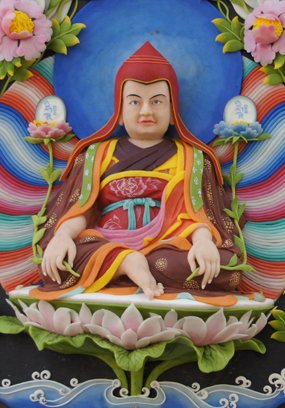 While the earlier Jonang masters were very active academically, due to political obstacles which arose in the 17th century, most Jonang practitioners began to focus increasingly on their spiritual practice. As a result, the Jonang Tradition developed an enormous depth of realisation which allows it to offer the most complete understanding of the Kalachakra system.

With presently more than seventy monasteries and retreat centers in Tibet, especially in Kham and Amdo, the Jonang Tradition continues to flourish. In Dzamthang Monastery alone, more than 5000 monks are currently studying Zhentong Madhyamaka as well as the five major subjects of Buddhist philosophy, following texts by Dolpopa and other revered Jonang masters. A three-year Kalachakra retreat has become a traditional part of training in the monasteries of the Jonang tradition and there are many yogis today engaged in lifetime retreat, practising the Six Vajra Yogas.

Due to the kindness of masters such as Khentrul Rinpoché, the modern world is slowly gaining access to the ancient wisdom of this profound tradition.

Over the course of his life, Khentrul Rinpoche has had the honour to study in more than 11 monasteries from each of the main traditions of Tibetan Buddhism. Of those, he holds a particularly strong connection to four prominent Jonang monasteries in the Golok/Amdo region of Eastern Tibet. These monasteries form the primary source of the Kalachakra tradition that Rinpoche upholds in the West: